A Lesson in History! 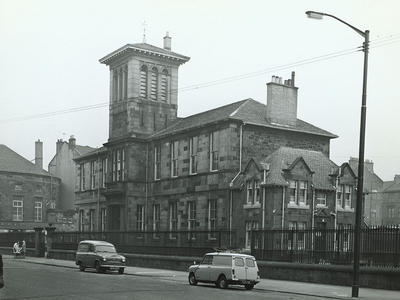 Elderpark wants to hear YOUR memories of iconic Govan school

ELDERPARK is appealing to our community to share their memories of an iconic Govan school.

The Association has embarked on a significant house building development of 82 homes at Nethan Street near Govan Cross.

And part of this is the restoration of the nearby Hills Trust School – bequeathed to the community by an 18th century philanthropist.

Thousands of local youngsters were educated within its walls since the “B” Listed building with a distinctive bell tower opened its doors in 1876.

The school in Golspie Street will be restored to its former glory as new offices for Elderpark bringing to an end years of dereliction and giving this magnificent building a new lease of life. The work is being carried out by construction company CCG.

Now we have set up a dedicated email address to gather memories relating to the school – hillstrustmemories@elderpark.org

Elderpark Chief Executive Gary Dalziel explained: “Work is under way to restore Hills Trust School as part of our new housing and office development and Elderpark is proud to be preserving such an iconic Govan building.”

We want to hear from people who attended the school, perhaps taught there or who have an interesting story to tell.

“Throughout the year we will be gathering these stories to build up a picture of what Hills Trust was like and will publish some of them when we complete our housing project at Nethan Street.”

We are also looking for memorabilia such as school photos, class registers or prizes given to pupils. All will be returned to their owners.

The development in Nethan Street will consist of 70 flats and 12 houses and will be a short walk from Govan Shopping Centre and subway station.

Abraham Hill was a Govan-born merchant who made his fortune in Wolverhampton. In 1757 he bequeathed £200 for the purchase of land around Govan parish. This land gradually accumulated in value and in 1875 the trustees commissioned architects to design Abraham Hill’s Trust School, which was managed by the Govan School Board.

In 1974 pupils were transferred to a new school on Nethan Street but this has now been demolished while the original has stood the test of time thanks to the skill of Victorian builders.

Elderpark expect the homes to be ready by summer 2020 and the school to be completed by the end of this year.